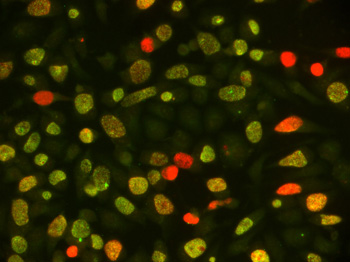 ‌Genome sequencing has revealed pmp gene families of between 9 and 21 members in Chlamydia sp., the latter representing nearly 15% of the genomic coding capacity. In collaboration with Dr. Ru-ching Hsia, Director of the University Core Imaging Facility, we have expressed all 9 Pmps of C. trachomatis, purified epitope-tagged recombinant polypeptides and produced monospecific polyclonal and monoclonal antibodies. Analysis of specific antibody in male, female and chronically infected patients with genital infection has revealed differential responses to a subset of Pmps (1). Studies of pmp expression in in vitro-grown Chlamydia trachomatis have revealed variable expression of the surface-exposed Pmps in a mechanism similar to phase variable phenotypes observed in many bacterial pathogens (2). Altered pmp gene expression has been demonstrated in stress-induced persistent chlamydiae (3). These and other observations are globally consistent with a proposed role for the Pmp family in antigenic variation and suggest that these proteins are important determinants of pathogenicity as well as potential vaccine components (4). We aim to identify mechanisms of differential pmp expression and antigenic variation at the cellular and molecular levels.