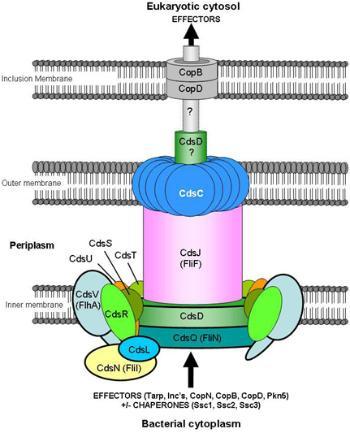 ‌Genomic analysis has revealed that type III secretion genes of Chlamydia are dispersed in several genomic clusters, a likely consequence of the unique evolutionary path of these organisms. Following the discovery of the T3S genes in collaboration with Dr. Ru-ching Hsia (1), we proposed based on structural similarity that chlamydial T3S injectisomes correspond to surface projections first identified by Akira Matsumoto (2). Based on ultrastructural observations by Matsumoto and his colleagues and on biomathematical analysis in collaboration with Dr. David Wilson, University of New South Wales, Australia, we have recently developed the “T3S-mediated contact-dependent hypothesis of chlamydial development” (3). Tenets of the hypothesis are that: a, chlamydiae grow strictly in contact with the membrane of the inclusion that contains them; b, contact is mediated by T3S injectisomes; c, the number of T3S projections (and the size of the contacting surface area) decreases along development; and d, detachment of chlamydiae from the inclusion membrane (and coupled T3S disruption) is associated with the onset of late differentiation of replicating reticulate bodies (RBs) into infectious elementary bodies (EBs). For the first time, the contact dependent hypothesis provides a rationale basis for the observed asynchronous developmental growth of chlamydiae. Furthermore, the hypothesis is consistent with the observed persistent state of aberrantly enlarged stressed chlamydiae (4). Strong support for the contact-dependent hypothesis has emerged from kinematic studies that indicate that replicating RBs and persistent RBs are tethered to the inclusion membrane, while late differentiating forms and EBs are freely moving within the chlamydial inclusion (5). Ongoing projects include further ultrastructural and kinematic analyses of chlamydial development, and the identification and functional characterization of type III secreted effector proteins across Chlamydia species.