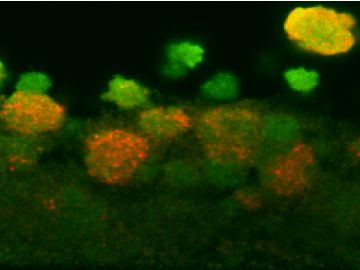 This NIH-NIAID funded project uses the immunoproteomics approach to identify candidates specific to the planktonic and biofilm mode of growth to find a vaccine that is able to prevent all forms of Staphylococcus aureus infection.

Staphylococcus aureus is a gram positive, ubiquitous bacterial species that is responsible for over 340,000 instances of infection that end in hospitalization and for over 40,000 deaths annually in the United States. One of the ways that S. aureus persists within the host, particularly on indwelling medical devices, is through a biofilm mode of growth that prevents clearance by antimicrobial agents and the host immune system. In order to resolve the infection, the nidus of infection (i.e. the indwelling medical device) must usually be removed. Our long term objective is to utilize the approach of proteomics to characterize S. aureus biofilms in molecular detail so as to identify biofilm up-regulated gene products. Selected up-regulated proteins will then be evaluated, first, for their ability to be recognized by the host immune system during an in vivo biofilm infection, and second, for their protective efficacy in preventing infections in an implant-associated infection model in rabbits. The data generated here will contribute to the eventual development of a vaccine against S. aureus biofilms infections in humans.

Rationale/Challenge of an existing paradigm:

In an early S. aureus biofilm infection, an intense inflammatory response is produced by the host. S. aureus is readily able to resist clearance from the host through a large number of virulence factors that specifically attack the host and promote immuno-avoidance. The expression of S. aureus virulence factors, timed by the quorum sensing system, then promotes the host to release TH1 cytokines including IL-12, IFN-γ, and TNF-α resulting in a shift of the adaptive immune system to an ineffective TH1 cell-mediated immune response. This type of response is incapable of clearing a biofilm infection, thereby enabling S. aureus to form a fully mature biofilm and a persistent infection. While the other branch of adaptive immunity, the TH2 antibody-mediated response, is ineffective against this mature bacterial community, it is readily effective at clearing the infection in the early phase of biofilm formation. However, this antibody-mediated response is shut down both by the host cytokines associated with the initial response to S. aureus, most notably IFN-γ, and by the S. aureus production of superantigens, capsule, and other toxins. By the time the antibody-mediated immune system recovers and mounts a response against the biofilm infection, the fully mature biofilm is able to resist clearance. Therefore, the biofilm up-regulated antigens administered preoperatively to patients undergoing implantation of an indwelling medical device may demonstrate protective efficacy. This will enable the host adaptive immune system to shift to the more effective antibody-mediated response if infected by S. aureus in a biofilm mode of growth, thereby escaping the deleterious effects of these pathogenic bacterial communities.

Goal of the specific research proposed: will be to conduct the studies enumerated in the specific aims to prove the validity of the following hypothesis

Hypothesis: We hypothesize that the production levels of specific proteins are up-regulated in S. aureus biofilms and immunization with these proteins may elicit a protective response that will prevent the development of biofilm infection in an animal model.