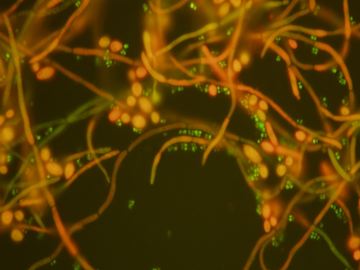 The eukaryote fungus, C. albicans, and the prokaryote bacteria S. aureus interact in a biofilm mode of growth to promote systemic staphylococcal infection through physical interactions and modulation of virulence factor expression. Our research is directed at understanding this physical interaction as well as the proteomic changes when these two microbial species interact.

The fungal species Candida albicans and the bacterial species Staphylococcus aureus are responsible for a majority of hospital-acquired infections and are often co-isolated in wounds and at mucosal surfaces in a biofilm mode of growth. C. albicans is a dimorphic species capable of switching morphology between a yeast and hyphal form, a property crucial to its ability to cause systemic and invasive mucosal infections. In contrast, S. aureus, although equipped with an array of toxins and immunoavoidance strategies,is non-motile and typically requires a break in the epithelium in order to invade host tissue. Although these microbial species commonly co-exist at mucosal surfaces, their interactions and the resulting effect upon virulence and systemic infection development have not been previously studied. We have recently developed a murine model of oral co-infection for in vivo studies where the oral mucosa of mice were infected with S. aureus alone, C. albicans alone, or both and mixed-species biofilms were allowed to form. Examination of harvested oral and kidney tissue demonstrated that while single species infections were maintained and limited to the oral mucosa, dual species infections resulted in systemic staphylococcal disease. Microscopy studies revealed S. aureus bound to C. albicans when in a biofilm mode of growth, particularly to the hyphal elements, and did so significantly more than all other bacterial species tested. In addition, the normally non-invasive S. aureus was shown to be able to penetrate HaCaT human keratinized epithelial cells and into explanted oral mucosa tissue while adhering to the invasive hyphal elements of C. albicans. This physical interaction was found to be mediated by the C. albicans Als3 hyphal protein and the mutant lacking this adhesin was unable to bind S. aureus in vitro or cause systemic staphylococcal infection in vivo. In protein expression studies of dual species biofilms, the S. aureus L-lactate dehydrogenase that enables survival from host derived oxidative attack was found to be up-regulated, whereas the global transcriptional repressor of S. aureus virulence factors CodY was down-regulated. Combined these findings indicate that the increased co-infection virulence and systemic staphylococcal infection may not be solely due to the microbial physical interaction and tissue penetration but also to increased virulence factor production that occurs during dual-species growth. These observations hold clinical significance as C. albicans and S. aureus frequently co-infect critically-ill hospitalized patients causing high morbidity and mortality rates. Therefore, our long term objective is to determine how these two microbial species cause synergistic infection by elucidating their interaction at the molecular, microscopic, and host levels using proteomics, confocal microscopy and in vivo studies in a biofilm setting. We expect the findings from this proposal to not only contribute to our understanding of the emerging field of fungal-bacterial research but to also lead to the identification of novel strategies directed towards the prevention and treatment of polymicrobial infections.

Rationale/Challenge of an existing paradigm:

Medical microbiology has long depended upon Koch’s postulates in which a single microbial species is responsible for a particular infection. These postulates ignore polymicrobial Infections and the potential cooperation and infectious synergism that can result from multispecies interactions. As mentioned above, co-infection of C. albicans and S. aureus represents a significant therapeutic challenge. Therefore, evaluating the physical and proteomic nature of the complex interaction between these two microbial species is the first step in understanding the transition from microbial colonization to invasive infections. In addition, understanding the global changes in protein expression and in vivo infectious properties in both species when alone or in dual species biofilms will broaden our understanding of the cooperative nature seen between these two organisms. Elucidating the interactions between these pathogens and how they cooperate in a cross-Kingdom nature to cause life threatening infections are critical to improve therapeutic strategies.

Goal of the specific research proposed: will be to conduct the studies enumerated in the specific aims to prove the validity of the following hypothesis:

Hypothesis: We hypothesize that the physical interaction and the differential production of S. aureus and C. albicans proteins in response to co-culture in dual species biofilms promotes invasive staphylococcal disease.