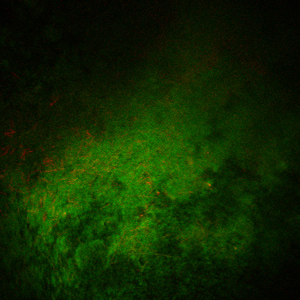 ‌The purpose of this project is to demonstrate that C. difficile forms a biofilm in clinical cases of pseudomembranous colitis. In addition, once we identify antigens that are recognized by the host immune response in vivo through an immunoproteomic approach, we will use these proteins as vaccine candidates for the prevention of gastrointestinal disease by C. difficile.

Clostridium difficile is a Gram-positive, strictly anaerobic, spore-forming pathogenic bacterial species responsible for circa 600,000 cases of colonic infection in the United States per annum. Infections with this microorganism—termed ‘Clostridium difficile-associated disease’ (CDAD)—vary in severity from diarrhea to pseudomembranous colitis and, in extremis, toxic megacolon. Infection is most commonly acquired nosocomially following administration of oral antimicrobial chemotherapy. The major virulence factors of Cl. difficile are enterotoxins A and B. In recent years a more virulent strain of Cl. difficile, NAPI/B27, has emerged. This strain, through its greatly increased toxin production, causes a greater incidence of the more severe sequelae of CDAD. Whilst enterotoxins A & B are indeed directly responsible for CDAD pathology, in order to cause infection Cl. difficile must first successfully colonize the colonic mucosal surface. Microbial biofilm is defined as a ‘surface-associated microbial community commonly enveloped within an extracellular matrix’. The primary characteristic of biofilm is a phenotype markedly different from that of identical microorganisms growing planktonically. It follows that proteins detected in planktonic cells may not be expressed during biofilm growth. Biofilm has been implicated in a number of types of chronic infection at various sites in the body, including at mucous membranes.

Our long term objective is to utilize established in vitro biofilm models and ex vivo molecular imaging together with proteomics and immunology to first demonstrate biofilm formation by Cl. difficile in vitro and in vivo followed by characterizing these communities in molecular detail so as to identify protein antigens that are both biofilm-specific and immunogenic during human infection. Selected such proteins will be used to develop a novel multicomponent Cl. difficile vaccine with the potential to inhibit both colonization and disease. The specific hypothesis behind this proposed study is that Cl. difficile forms biofilm on the colonic mucosa during infection and furthermore that the phenotypic distinctiveness of Cl. difficile biofilm cells will allow elucidation of biofilm-specific antigens and that several such antigens can be combined as a multivalent vaccine.

This hypothesis is based on the following observations. First, Cl. difficile disease exhibits characteristics of a biofilm infection. CDAD pathogenesis requires interaction of Cl. difficile with the colonic mucosal surface in order to both avoid being washed out of the gastrointestinal tract by peristaltic expulsion and efficiently deliver toxin to colonic enterocytes. Enterotoxin production in the colonic lumen would result in proteomic degradation of the toxins before they could reach the colonic mucosal surface. Thus colonization of the mucosal surface is essential for establishment of Cl. difficile in the colon and initiation of CDAD. CDAD commonly recurs after treatment cessation, a property common to many chronic biofilm-type infections. Second, the phenotype, and thus also the proteome, of bacterial cells residing within biofilms is distinct from that of identical organisms living planktonically. Thus elucidation of antigens specific to biofilm will allow development of an anti-biofilm vaccine with the potential to prevent biofilm formation and colonization by Cl. difficile and so also CDAD. Third, existing Cl. difficile vaccine development efforts have focused either upon inhibiting toxin action or on antigens selected based upon planktonic culture. The former, whilst possibly preventing CDAD, would not prevent colonization and so transmission of Cl. difficile between individuals. The latter is unlikely to prevent colonization and transmission since the biofilm phenotype has not been considered during antigen selection. Thus an anti-Cl. difficile vaccine developed taking the biofilm phenotype into consideration offers the possibility of both preventing CDAD in the vaccinated individual and, by virtue of its inhibiting colonization of that individual, transmission of Cl. difficile to others.

Based on these observations, the experimental focus of this proposal is on the characterization of Cl. difficile biofilms in vivo and in vitro followed by elucidation of biofilm antigens immunogenic during human infection with Cl. difficile. Such antigens will be combined in a multivalent vaccine and their efficacy assessed in an animal model. The specific aims of this proposed research program are: