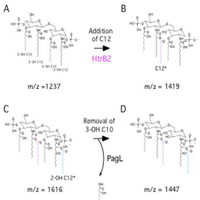 Pseudomonas aeruginosa is a ubiquitous environmental Gram-negative bacterium found in soil and water. This opportunistic pathogen can cause infections in individuals with innate immune defects, including individuals with cancer, burns, cystic fibrosis, and exposure to chemotherapy. Cystic fibrosis (CF), the most common lethal genetic disease of Caucasians, is the result of mutations in the CFTR chloride channel. P. aeruginosa infects the lungs of most individuals with CF, causing severe and progressive pulmonary disease that leads to premature death in the first three decades of life. Successful adaptation of P. aeruginosa to the CF airway, essential for bacterial persistence, replication, and resistance to antibiotics is poorly understood. Our previous studies have shown that one of the earliest known P. aeruginosa adaptations to the CF lung is the synthesis of specific structures of lipid A, the bioactive component of lipopolysaccharide (LPS). P. aeruginosa adaptation to CF airways leads to constitutive expression of lipid A modifications that are regulated in isolates from acute infection (blood, ear, eye, and urinary tract) or environmental isolates. CF-specific changes in P. aeruginosa lipid A structure includes the addition of aminoarabinose and palmitate leading to resistance to host innate immune defenses, such as cationic antimicrobial peptides and increased proinflammatory signaling. The genetic mechanism(s) by which P. aeruginosa isolated from the airways of patients with CF synthesize specific lipid A structures is unknown. In addition, a subset of P. aeruginosa clinical isolates from patients with severe pulmonary disease that lacked expression of PagL, a newly identified 3-O-position deacylase, had enhanced resistance to ß-lactam antibiotics but not aminoglycosides. Therefore, further study of the synthesis and regulation of CF-specific lipid A modifications is necessary to understand their role in resistance to antibiotics and in P. aeruginosa adaptations in CF lung infection.

Goal of the specific research proposed:

I) Define the regulatory mechanism of expression of P. aeruginosa lipid A deacylase, PagL, and its role in resistance to ß-lactam antibiotics in clinical isolates.

III) Define the role of genes encoding P. aeruginosa lipid A lauryl transferase (htrB/lpxL) and lipid A hydroxylases (lpxO) in the synthesis of CF-specific lipid A structures.