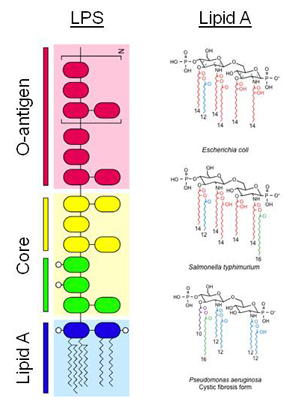 The focus of our laboratory is to understand the molecular basis by which gram-negative bacteria modify the lipid A component of lipopolysaccharide (LPS) and how these alterations affect or circumvent normal host innate immune system responses. LPS is the major surface molecule and pathogenic factor of Gram-negative bacteria. It consists of three distinct structural regions: O-antigen, core, and lipid A. The molecular structure of LPS varies dramatically among different bacterial species. Gram-negative bacteria have evolved mechanisms to regulate the structure of their LPS during growth in various environmental conditions. During infections of animal hosts, recognition of LPS structures by the host innate immune system promotes the synthesis and secretion of two classes of immune response effectors: cytokines and chemokines that coordinate immune cell responses such as phagocytosis, and anrimicrobial molecules, which directly kill invading microbes. Lipid A, also as known as endotoxin, is recognized by the mammalian innate immune system via the Toll-like receptor 4 (TLR4) complex. Diversity in TLR4-mediated recognition and signaling pathways has been identified across species, and genetic variability in these pathways among individuals may be responsible for clinical variability in infectious disease outcome.

Lipid A structures isolated from different bacterial species vary in the number and length of fatty acid side chains, the presence of terminal phosphate moieties, and other structural modifications. These modifications can promote resistance to host innate immune killing mechanisms by antimicrobial compounds and alter recognition by TLR4. Increasing evidence indicates that selective pressure on both pathogen and host results in the observed diversity of lipid A structures, and that this diversity likely plays a role in the evolution of infectious diseases. Therefore, studying lipid A structural diversity among a variety of Gram-negative species that cause both acute and chronic infections will lead to a better understanding of the molecular mechanism of lipid A recognition by host receptors. Ultimately, these studies may potentially contribute to the development of new antimicrobials that enhance innate immunity or inhibit bacterial resistance, and to the generation of new adjuvants that enable safer, more effective vaccines.