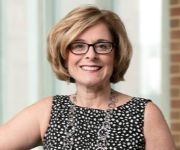 Throughout her career, Marion Manski, RDH ‘88, MS ’04, has been a trailblazer within the dental hygiene profession—whether advocating for hygienists’ rights to administer nitrous oxide and local anesthesia or increasing preventive dentistry outreach in local communities.

The annual award honors individuals who advance the art and science of the dental hygiene profession. This year is the second consecutive year in which a University of Maryland School of Dentistry (UMSOD) professor has been a recipient; Jacquelyn Fried, RDH, MS, was the 2016 honoree.

"She has a passion for dental hygiene, and it shows in all that she does. When I was a student, she encouraged me to become active in my professional association, and sparked my own leadership journey,” said Laura Smith, RDH ’12, who studied under Manski and nominated her for the award.

In 2006, Manski completed a local anesthesia training course given by the University of New Haven in Connecticut. She then launched a local anesthesia training course in Maryland through the UMSOD dental hygiene program. In 2009, she received the Northeast Regional Board Certification, becoming the first course-licensed dental hygienist in in the state. She was able to teach a lab competency level to UMSOD dental hygiene students until a law passed in 2010 licensing hygienists to administer anesthesia. Thus, her course was established early on before passage of the bill, and she submitted her course as a template for the Maryland State Board of Dental Examiners, as a member of the local anesthesia ad-hoc committee, to create rules and regulations for anesthesia in 2010 that were eventually adapted into law.

In recognition of her advocacy, Manski was included in the 9th annual “6 Dental Hygienists You Want to Know” list by Dimensions of Dental Hygiene, a monthly, peer-reviewed, professional journal.

This list comprises hygienists who are identified by their peers as leaders within several categories including academia, clinical practice, and industry. Manski was listed in the "Mover and Shaker" category.

In addition to local anesthesia and nitrous oxide monitoring and administration, Manski has pushed for greater interprofessional education between hygienists and other health professionals.  “We want to expand the arm of dentistry that is prevention,” she said. “If we could get to the point where people have more access to care, we can have a positive impact on prevention of disease orally and systemically.”

A native of Branford, CT., Manski became interested in oral health at age 15, when she worked as an orthodontic assistant in an orthodontic office. “I became fascinated with everything teeth,” she said.