When measuring tongue shapes from  ultrasound images, automatic extraction and tracking of the tongue surface is necessary to avoid time consuming manual extractions. We developed a  system, EdgeTrak, which can track the tongue surfaces through a sequence of 2D ultrasound images. EdgeTrak is currently being used by scientists at several institutions. Feedback from them, and validation, indicate that the system is efficient and accurate for speech research and related applications. 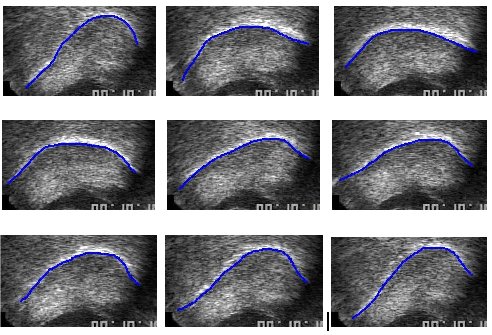 Results from a speech sequence

Any sequence of black and white images can be measured using Edgetrak.  Open-contours are extracted from the lower edge of a white to black gradient image.

Novelty of the EdgeTrak System

In a snake model, the external energy is usually related to the gradient of the image. In reality, however, images are noisy and there are always unrelated high-contrast edges which make the gradient information  insufficient to extract edges of interest.  In an ultrasound image of the human tongue, a bright white band is formed by the reflection of ultrasound waves at the upper surface of the tongue. The lower edge of the band is the upper surface of the tongue, and the upper edge of the band has no physical interpretation. Thus, only the lower edge is of interest to speech scientists though both edges have high gradient. It is hard to distinguish them by only using  gradient information . 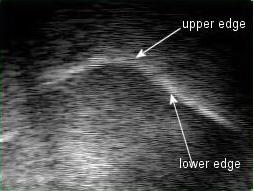 An example of  ultrasound image of the tongue

To distinguish the tongue surface from the other high contrast edges, e.g., the upper edge of the air reflection, we introduce a constraint which is related to intensity in local regions. 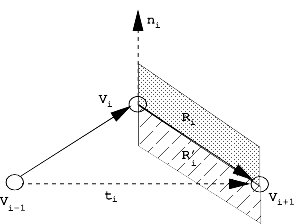 Please visit the EdgeTrak web page at the VIMS Lab, University of  Delaware.
Send any questions to mli@cis.udel.edu