Teenagers from as near as Baltimore City and as far away as Anchorage, Alaska, came together at the University of Maryland, Baltimore (UMB) to compete in the USA National Brain Bee championship.

The winner of the competition, which took place March 17 through March 19, is Sojas Wagle of Little Rock, Ark. The second- and third-place winners, respectively, are Aarthi Vijayakumar of Minneapolis, Minn., and Amit Kannan of Indianapolis.

This is the 10th anniversary of the Brain Bee, a neuroscience competition for high school students that was founded by Norbert R. Myslinski, PhD, associate professor in the Department of Neural and Pain Sciences at the University of Maryland School of Dentistry (UMSOD). In recognition of his worldwide achievements in science education, Myslinski was named the 2016 Science Educator of the Year by the Society for Neuroscience. 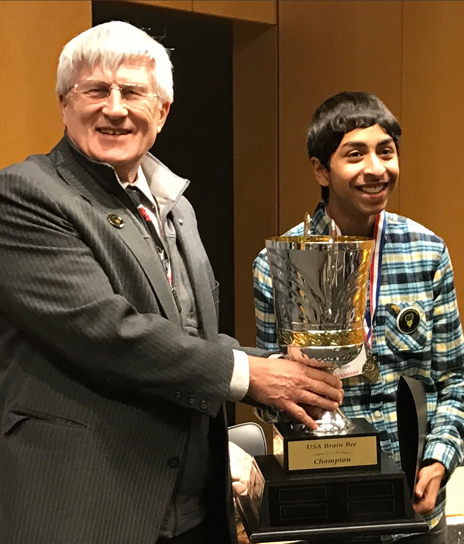 “Its purpose is to motivate young students to learn about the human brain and inspire them to seek careers in the basic and clinical neurosciences to help treat and cure diseases of the brain and nervous system,” Myslinski said of the Brain Bee. “We build better brains to fight brain disorders.”

Accompanied by their parents, the students were greeted during opening remarks by Myslinski, UMB President Jay A. Perman, MD, and Joel D. Greenspan, PhD, professor and chair of the Department of Neural and Pain Sciences at UMSOD. Greenspan is co-director of the University of Maryland Center to Advance Chronic Pain Research.

Perman told the teenagers that neuroscience needs all the talent that resides with them. “We need you to unlock the many mysteries of the brain so that we can better understand human behavior, so that we can help the millions of people around the world who suffer terribly from brain disorders, and so that we can discover our full potential for thought, perception, and empathy.”

Saying he can’t imagine a more rewarding field of study, Perman went on to take advantage of a perk of hosting the national championship: wooing the talented youngsters to one day study at UMB. Pointing out that the University’s neuroscience and neurobiology programs are among the best in the country, he noted an unprecedented push by UMSOM to recruit the nation’s best researchers in three key areas.

The first is brain disorders. The other two are cancer and cardiovascular and metabolic diseases.

Perman thanked Myslinski for his role in the Brain Bee as well as Greenspan and Mark Reynolds, DDS, PhD, dean and professor at UMSOD, for the school's support. And the president praised the assembled parents, teachers, and coaches for nurturing students’ curiosity.

Greenspan also encouraged the youngsters. “We need people knowledgeable in neuroscience in basically every human endeavor,” he said, mentioning in particular developments in what can be done in rehabilitation.

“What you are learning is going to be valuable no matter what you go into as professionals,” Greenspan said.

Given the highly competitive nature of the setting, his audience members were no doubt more concerned with the facts they had already learned and how that knowledge might help them advance in the Brain Bee. They must prove their command of topics such as intelligence, emotions, memory, sleep, vision, hearing, sensations, and addictions.

As the first-place winner, Sojas Wagle advances to the international competition, to be held in August in Washington, D.C.