This July at the University of Maryland School of Dentistry (UMSOD), 15 local middle-school students got hands-on experience in dentistry at the Planet Smilez Discovering Dentistry Camp.

“Mentorship matters,” said Andrea Morgan, DDS, director of student advocacy and cultural affairs at UMSOD. “When the dental students show the young scholars something they love to do, and share the excitement of learning, you can see the transformation that takes place.”

At the Discovering Dentistry Camp, in addition to learning about the many careers available in dentistry, the importance of fluoride, and the dangers of soda, the young scholars were able to dive right in and showcase their dental aptitude. They practiced suturing by stitching up hot dogs and created stone molds of their hands, later using dental molds to practice removing and filling cavities. The students also learned how to work using a mirror — just like dentists — by writing their names and solving a maze in reverse. They also got creative by making posters about the dangers of smoking. 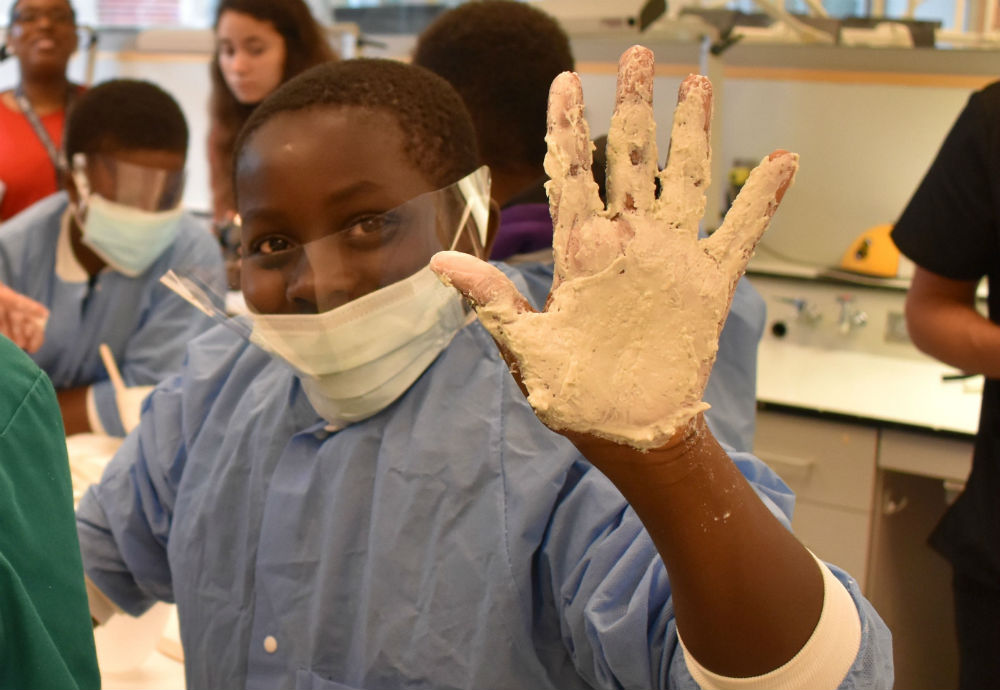 A student participates in the CURE Scholars program

“By exposing the scholars to different aspects of the dental field,” said third-year DDS student Michelle Tarr, lead coordinator of the camp, “we hope to empower them so that they see themselves as future oral healthcare providers.”

“This year’s cohorts really excelled with hands-on activities,” she added. “I was really impressed by how quickly they grasped complex concepts and were able to explain those concepts to others.”

At week’s end, the 15 scholars, decked out in scrubs, gathered with family, volunteers, and members of the UMB community for a closing ceremony at Davidge Hall. Awards were given for the top five sutures and top three posters. In his celebratory remarks, UMB President Jay A. Perman, MD, recalled the long history of medical education at Davidge Hall, telling the students that they were “now part of a long and important tradition.”

Echoing those thoughts, Mark A. Reynolds, DDS ’86, PhD, dean of UMSOD, said that the CURE Scholars were welcome to return at any time — especially if they were pursuing dentistry.

Judging by the young scholars’ excitement, it wouldn’t be a surprise to see them as D1s in the not-so-distant future.