The University of Maryland School of Dentistry (UMSOD) community was saddened to learn that researcher and entrepreneur Mark E. Shirtliff, PhD, professor in the Department of Microbial Pathogenesis, had lost his life after a raft overturned in the Yellowstone River near Gardiner, Mont., on July 12.

Shirtliff held a primary appointment at UMSOD and a secondary appointment as professor in the Department of Microbiology and Immunology in the University of Maryland School of Medicine (UMSOM).

The researcher also was the lead inventor of a vaccine technology that UMB last year licensed to Serenta Biotechnology, LLC, a Gaithersburg, Md.-based startup for which Shirtliff was a co-founder and chief scientific officer. The license is based on technology co-owned by UMB and another university that is the basis for a multivalent vaccine against infections caused by Staphylococcus aureus, a bacterial strain often resistant to antibiotics. 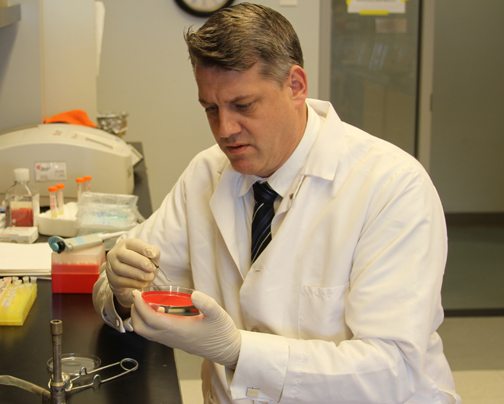 Shirltiff’s most recent work was aimed at developing a hand-held technology that would be adept at identifying six of the most virulent kinds of bacteria, including Staph aureus. Collectively, these are known as the “ESKAPE” pathogens.

“Mark was a brilliant scientist and professor who pursued innovation and knowledge with seemingly unstoppable energy and enthusiasm,” said Mark A. Reynolds, DDS, PhD, MA, dean and professor of UMSOD. “His groundbreaking work in developing a novel way to speed the diagnosis of some of the most virulent kinds of bacteria has great potential to save many lives. Moreover, Mark was a remarkably generous colleague who, whether asked to sit on a committee, collaborate on a project, or launch a new research initiative, could be counted on to give his all.”

Shirtliff was a leading expert in the field of biofilm, which is a dangerous kind of growth of bacteria that can form on many surfaces, including surgically introduced implants such as pacemaker wires. Biofilms also can form along the gumline as a sticky plaque that exacerbates tooth decay.

According to the National Institutes of Health, 65 percent to 80 percent of all infections are biofilm-related. In any one year, there are more than 17 million biofilm infections in the United States, with 550,000 cases resulting in death. Biofilms are especially problematic because they resist clearance by the host’s immune system and are tolerant to antibiotics.

The international training center for biofilm research, the Center for Biofilm Engineering, is located in Montana. During the summers, Shirtliff had continued to return to the center, where he had trained as a postdoctoral fellow after receiving his doctorate in 2001 at the University of Texas Medical Branch, Galveston, in the Department of Microbiology and Immunology. His thesis was titled “Staphylococcus aureus: Roles in Osteomyelitis.”

Shirtliff became an assistant research professor in 2003 in the Department of Microbiology at Montana State University in Bozeman. Later that year, he accepted an offer to move to Maryland and enter the tenure track at UMB.

“Mark was a leading international biofilm researcher of exceptional productivity,” said Patrik Bavoil, PhD, professor and chair of the UMSOD Department of Microbial Pathogenesis. “He was a prolific author and a very generous colleague. His level of commitment to his research and students was remarkable. And his personality was such that once you met Mark, you didn’t forget him.”

The author of more than 120 peer-reviewed scientific papers and book chapters on pathogenic microbes, Shirtliff explored their biofilm mode of growth and the chronic diseases they cause. He was known for collaboration with colleagues in multidisciplinary research, his entrepreneurism, and his mentorship.

“Mark was an incredibly prolific inventor and entrepreneur,” said Phil Robilotto, DO, MBA, chief commercialization officer for UM Ventures Baltimore. “He was a past winner of the prestigious BioMaryland LIFE Award for his work in Staph aureus vaccines, had recently helped launch the UMB startup Serenta Biotechnology, and was actively working with our tech-transfer team to start another new company based on his research.  He was also always positive, upbeat, and just a tremendous person to work with.”

As testimony to his role as a committed mentor, three of Shirtliff’s students won the prestigious Graduate Program in Life Sciences Elaine Miye Otani Memorial Award: Rebecca Brady (2007), Brian Peters (2010), and Jeffrey Freiberg (2017). No other mentor at UMB has had more than one student achieve this recognition.

"Mark was a highly valued member of the microbiology and immunology community at UMB. He contributed in so many ways, as a teacher and mentor, a researcher and an active member of the university community,” said James B. Kaper, PhD, chair of the Department of Microbiology & Immunology at UMSOM. “He was a dedicated teacher and mentor who helped and inspired many of his students to become scientists themselves. He was a good and generous person who was a dear friend to many of us. His tragic death is a heartbreaking loss in so many ways. We send our heartfelt condolences to his family."

Shirtliff, 49, lived in Ellicott City, Md., with his wife, Birthe Kjellerup, PhD, MSc, assistant professor in the Department of Civil and Environmental Engineering at the University of Maryland, College Park.

He was a father of four.

Services are being held Wednesday in Bozeman. A memorial service to be held at UMB is being planned for next week.