A group of UMB CURE Scholars put their science and math skills to the test with a murder mystery.

As part of the first week of the CURE Scholars Summer Program, rising eighth-grade students took part in a forensics lab, where they used mathematics to try to solve the Case of the Murdered Mayor. Meanwhile, seventh-graders deepened their knowledge of oral health and delved into genomics during activities organized by the University of Maryland School of Dentistry (UMSOD) and the Institute for Genome Sciences at the University of Maryland School of Medicine (UMSOM).

With experiences like these, the UMB CURE Scholars Program keeps students engaged. The initiative made history as the nation’s first program to begin this educational enrichment as early as sixth grade. Keeping a heavy emphasis on STEM (science, technology, engineering, and math), UMB CURE  provides students as young as 11 and 12 with hands-on learning such as using a 3D printer or dissecting a cadaver knee in anatomy lab. 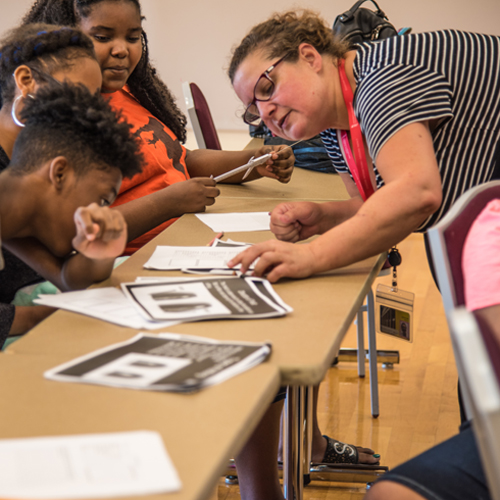 Speaking of the ways that the program collaborates across disciplines with schools at the University of Maryland, Baltimore, Executive Director Robin Saunders, EdD, MS, said UMB CURE is thrilled to have the opportunity to partner. “It’s imperative that we offer students meaningful STEM opportunities that will enrich and further their understanding,” she says.

This year, 16 rising seventh-graders and 18 rising eighth-graders are roaming the campus for the CURE Scholars Summer Program. Teachers from the schools join with CURE mentors, staff members, and UMB faculty to conduct the three-week summer camp. For example, during the forensics sessions held at the SMC Campus Center, mentor Ann Felauer, MSN, RN, CPNP-AC/PC, clinical instructor at the University of Maryland School of Nursing, lent a hand as eighth-graders examined the evidence.

They analyzed real bullets and shell casings to identify a weapon and nail down a suspect. They compared markings and measurements of eight bullets and used mathematical conversions to help uncover what type of gun the suspect used to commit the crime.

“It was cool being in the forensic scientist position and learning how to solve a crime,” says GSA student Machai Whyte. Machai’s grandmother watches a true crime television series called Forensic Files, and this lab put Machai right in the middle of her favorite show.

The math skills come in handy during the regular school year, according to another GSA student, Shereen Farquharson. After joining CURE in 2016, she recalls feeling confident in her classwork when multiplying decimals and learning about electricity because she had encountered these lessons through the CURE Scholars Program.

“It’s really helping me with my schoolwork,” Shereen explains, “and when I go to college, I am going to be set up knowing what to expect.”

The goal of UMB CURE is to provide West Baltimore youth with a window into the world of STEM and encourage them to pursue future careers in medical research, science, and health care. At 13, Shereen already has big career aspirations.

“I want to be a cardiologist,” Shereen says.

Earlier in the week, during a session at UMSOD, GSA seventh-grader Kaden Johnson was expressing career aspirations of his own. He wrote them on the plaster cast of a lower jaw after learning what it’s like to shape the filling of a tooth.

At UMSOD, 15 seventh-graders learned skills that a dentist needs to restore teeth, and in one exercise they gazed at the reverse image one sees in a mirror to guide their signatures or make it through a maze.

“The goal … is to educate children about nutrition, oral cancer prevention, and the importance of oral hygiene,” says Kathryn Pawlak, a fourth-year dental student who also founded Planet Smilez, a nonprofit engaging in oral health education. “The secondary goal is to instill interest in the profession. It is my hope that these middle-school children feel the same spark toward dentistry that I felt as a child.”

Pawlak was aided by more than a dozen dental hygiene and dental student volunteers in the lab, some of whom were joined by UMB CURE mentors during an awards ceremony June 29.

In what has become a rite of passage held at UMSOM’s historic Davidge Hall, scholars put on dental scrubs, reminding them of what could be future careers. And three students won prizes for their oral health posters about harm caused by tobacco.

(View a photo gallery and see a video below.)

The eighth-graders are getting instruction about DNA, too, first on a field trip held June 29 at biotech firm BD in Sparks, Md. (View a photo gallery.)

Later they will go deeper at the University of Maryland School of Pharmacy. There Lisa Jones, PhD, assistant professor of pharmaceutical sciences, leads a lab in which they will look at DNA samples from cheek swabs.

This lesson in DNA analysis, paired with the skills learned in the forensics lab, will help these scholars crack the Case of the Murdered Mayor.

It’s not all work and no play for the scholars. They have an active schedule at URecFit at the SMC Campus Center during the summer program, which concludes July 13 at UMB.