A University of Maryland School of Dentistry (UMSOD) researcher has developed an experimental vaccine that protects up to 80 percent of mice against Staphylococcus aureus (S. aureus), the bacterium that accounts for one-third of deadly healthcare-acquired infections (HIAs) – which are often acquired after people undergo surgical procedures. 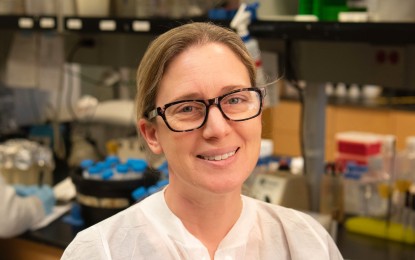 Janette Harro, PhD, a research assistant professor with UMSOD’s Department of Microbial Pathogenesis, and colleagues published their findings in a recent issue of Infection and Immunity, a journal of the American Society for Microbiology.

Harro notes that the vaccine has proven effective not only in mice but also in 66 percent of rabbits infected with S. aureus, the most deadly Staph bacterium. And, though tested so far only in animals, the vaccine has demonstrated the potential to drastically reduce the number of patients who succumb to S. aureus infections post-surgery — a time when their immune systems already are compromised.

“This vaccine could prove hugely beneficial especially for orthopedic and cardiovascular patients, for example, where medical structures or devices are implanted,” says Harro, a scientist who specializes in the study of biofilms. She and her laboratory colleagues and collaborators elsewhere are carrying out the work on biofilms started by the late Mark E. Shirtliff, PhD, a professor in the department who published extensively in the field prior to his death in July 2018. He is among the eight coauthors of the published study, which also includes Devon Allison, DDS, PhD, a resident in periodontics at UMSOD.

“S. aureus is difficult to eradicate because it so readily forms biofilms at the surgical site,” Harro says. Biofilms are a thin, slimy film of bacteria that adheres to a surface, such as the site of incision or on implanted devices such as surgical rods, artificial knees and hips, and pacemakers.

“Preliminary results are very promising and we are hopeful that this vaccine will prove protective in humans as well,” says Mark A. Reynolds, DDS, PhD, dean and professor at UMSOD. “Dr. Harro and colleagues’ innovative research offers the potential of significantly reducing the risk of life-threating S. aureus infections following surgery.”

In theory, Harro says, if patients undergoing elective surgeries can be immunized prior to surgery with a vaccine that protects against a deadly S. aureus infection, both fatalities and health care costs could be markedly reduced.

“Biofilms unfortunately are very hard to treat,” she says. “Antibiotics don’t work well and the immune system can’t clear it effectively on its own.”

According to the Centers for Disease Control and Prevention, HIAs account for an estimated 1.7 million infections annually and 99,000 associated deaths, mostly due to their virulence and resistance to traditional antibiotics. The S. aureus bacterium currently is the culprit behind one-third of hospital-acquired infections and costs the U.S. healthcare system $10 billion annually.

Most vulnerable are young children, the elderly, and patients with compromised immune systems. Longer hospital stays put a patient at greater risk, as does poor hygiene, antibiotic resistance, and the use of catheters. A surgical site can be contaminated by contact from a healthcare provider, equipment, or from germs already on the body or in the air. An estimated 2 to 5 percent of patients undergoing surgery succumb to hospital-acquired infections.

The next steps for the experimental S. aureus vaccine involve testing in a wider range of animal models and analyzing its effectiveness across various strains of the bacterium as well as with multiple conditions such as skin and soft tissue infections, bone and joint infections, bloodstream infections, pneumonia, and septic shock.