Plagued by migraines? A treatment that’s ancient in its origins can help, according to new research from David A. Seminowicz, PhD, associate professor in the Department of Neural and Pain Sciences at the University of Maryland School of Dentistry (UMSOD).

A recently published article in Pain, coauthored by Seminowicz, details how mindfulness — a concept derived from a 2,000-year-old Eastern practice — “is an effective treatment option for episodic migraine.” 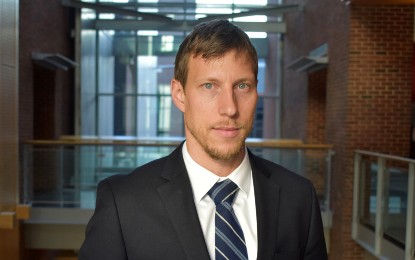 It’s part of a study conducted in collaboration with Jennifer A. Haythornthwaite, PhD, professor in the John Hopkins School of Medicine’s Department of Psychiatry and Behavioral Sciences. Funded by a $3.6 million National Center for Complementary and Integrative Health (NCCIH) grant, subjects received weeks of training at Johns Hopkins in either enhanced mindfulness-based stress reduction or a tailored course on stress management for headaches. Patients recorded their headaches in a diary and received functional MRI testing at UMSOD at baseline and at 10 and 20 weeks.

The results were positive: Mindfulness was an effective treatment for those suffering from migraines. The researchers found that, compared to those who received training in stress management, those who practiced enhanced mindfulness had fewer headache days and reduced headache-related disability. The MRI findings suggested that the enhanced mindfulness group also had improvements in attention-related brain network function.

In the Pain article, Seminowicz and his coauthors write that the results were “comparable to commonly used first[-]line treatments” such as valproic acid.

“This is really good news for patients,” Seminowicz says, “especially because mindfulness is a non-pharmaceutical option that has no side effects.”

Such a discovery can have lifechanging effects.

“Dr. Seminowicz’s novel research on alternative methods to pharmacological interventions has the potential to improve the lives of those afflicted with migraines, and others who suffer from chronic pain,” said Mark A. Reynolds, DDS, PhD, dean and professor at UMSOD.

Shana Burrowes, PhD, a postdoc at Boston University, worked as a graduate research assistant in Seminowicz’s lab while earning her PhD and made the study the topic of her dissertation. A migraine sufferer herself, she says the study “gives us another tool in our arsenal to fight migraines.”

After living with migraines for so long, she continues, “you learn just to go through and ignore the pain. But mindful breathing makes you acknowledge the pain in the moment and learn a better way to cope.”

Having studied chronic pain for the better part of two decades, Seminowicz was always interested in non-pharmacological interventions and was drawn to mindfulness due to its accessibility.

“It can be learned by anyone,” he says, which makes it accessible and useful when pharmaceuticals are not.

He is now at work on another National Institutes of Health-funded mindfulness study, this time focusing on rheumatoid arthritis. The goal there is to go a step further, determining what aspects of mindfulness are most effective.