The Narwhal: A Whale of a Tooth 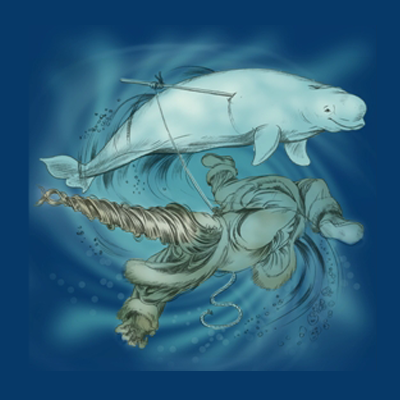 Immerse yourself in the world of narwhals.  Discover ancient myths and recently uncovered facts relating to this curious creature with a single straight tusk that can grow up to 9 feet long.

Narwhal Model: Get up close and person with a life-size model of Monodon monocerous, the narwhal that hangs from the ceiling. (Our Narwhal model will be on exhibit at the National Museum of Natural History, Smithsonian Institution August 3, 2017-2019)

Inuit Legend:
How the Narwhal Got its Name

A woman lived with her daughter and son, who was born blind. The son’s sight improved slightly as he aged but his mother continued to insist that he was blind. One day, a polar bear came near their house, the mother asked the son to kill it. The son drew back the arrow while the mother aimed. The arrow pierced the bear’s heart and although the son could hear the groans of the dying bear his mother told him he had missed. That night the mother and daughter ate polar bear meat while she fed her son dog meat.

An old man visiting the family told the daughter that in order for her brother to regain his sight they should watch for a red throated loon to swim close enough to them for the brother to hold onto the loon’s neck. The loon in a lake near their house would take the boy to the bottom of the lake and when they surfaced his sight would return. The boy followed the old man's instructions and when he returned home he saw a polar bear skin and asked his mother where it came from knowing it was the bear he killed. The mother responded by saying a man came by and left it for them.

Later that year a pod of belugas swam closer to shore than normal. The son grabbed a harpoon and asked his sister to join him; after catching a small whale, the mother asked if she could join them. The son gave the end of the harpoon line to his mother and told her to tie it around her waist and he would aim for another. Instead of harpooning another small one the son deliberately harpooned the largest male beluga. His mother was pulled into the sea becoming entangled in the harpoon line. In her struggle to get free of the line her hair twisted into a long lance and the narwhal was created.