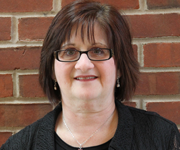 Clinical Assistant Professor Deborah Rodriguez, DDS, earned her certificate of dental hygiene from the Forsyth School for Dental Hygienists in 1977. She then received a DDS from the University of Maryland School of Dentistry in 1985 and completed an advanced education in general dentistry residency in 1986. She established a general dentistry practice in Crofton in 1987. Dr. Rodriguez began her teaching career in 1992, as an associate professor of dental hygiene at Baltimore City Community College and later served as an assistant professor at UMSOD from 2001 through 2005.